Difference between revisions of "Render options"

Rendering an animation in Synfig can be done in two way, by the Command Line Interface (CLI) or through the Render Dialog

Here are the file Target that can be rendered

Rendering to video directly from Synfig under Windows Operating Systems presents some challenges.

If you want to render to anything other than .mpg with "ffmpeg", you'll want to save a series of images that represent your animation, to a still format that ffmpeg can read. I recommend "png". Whilst you can render to any size image, if you're going to show your video on Youtube*.mpg->, you may want to take that into account when you render. 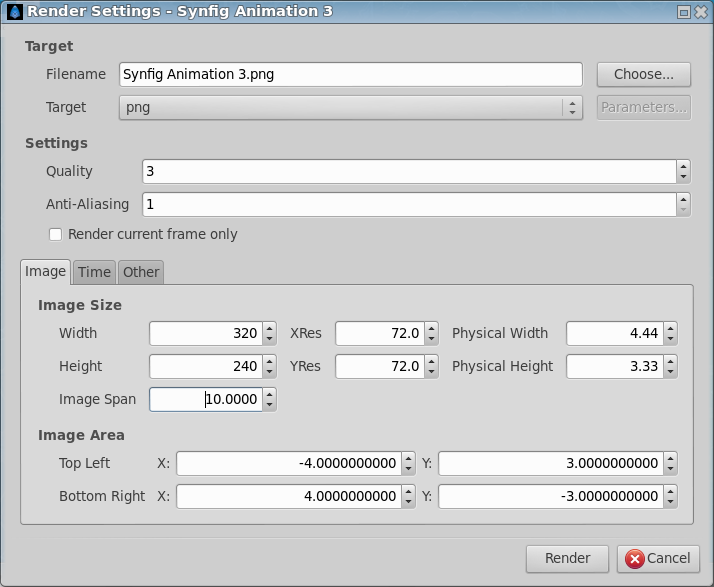 You will get a series of .png files in your output directory. Open a command prompt, cd to that directory, then use ffmpeg to assemble these png files into the video stream of your choice. for example -

creates a Flash video file of with the same framerate as used on Youtube. You should be able to submit it to Youtube without the need for the Youtube servers to have to re-compress it.

The yuv file is rendered but it seems to have a not compatible format. See the console output when try to convert to a avi using ffmepg.

I can watch a .yuv animation. You need to specify the size it was rendered at - that doesn't seem to be part of the file format:

I can single-step through a .yuv animation, using SPACE to step forward and BACKSPACE to step back through the frames:

I can also convert a .yuv to a series of .png files. This makes file-0.png through file-23.png for a 24 frame animation:

I also discovered that ffmpeg will happily convert a .yuv to .avi if you just tell it the image dimensions:

Mmmm I can play yuv files with mplayer and with ffplay. Also I can convert a yuv file to an avi (or whatever ffmpeg can encode) without telling the video size. I think it depends on how ffmpeg was compiled. Genete 11:59, 4 June 2008 (EDT)

note 2 - how to render for TV formats

If you need to render stills (pngs) for something where the final format does not have square pixels, such as PAL or NTSC DV, you can use the approach outlined below.

0) Select png format as you would otherwise

2) Just before rendering, in canvas property->Other->Locks and links, set checkboxes for Image Aspect and Image Span, and uncheck Pixel Aspect (Depending on synfig version, this may possibly be the options dialog for File|Render, at least it is for me)

3) Change back to the Image settings