Rendering a long or complicated animation can take a while. You may need to do several renders before you are happy with your finished animation. Therefore, before you render your animation, it's a good idea to preview all or just a part of it at lower quality to save time.

You may also find that working on your animation by looking at a render in a normal media player is not very useful. You will see time displayed in fractions of a second instead of as frame numbers and moving backwards and forwards (scrubbing) can be difficult.

Synfig Studio has a very flexible preview tool that solves both of these problems.

There are two ways to preview the animation in your current canvas:

If you do either of these things the Preview Options dialog will appear. 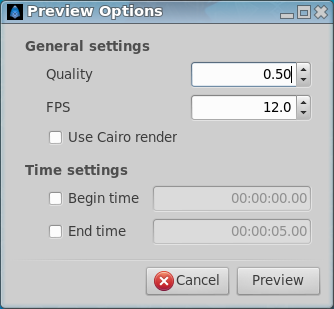 It is divided into two sections: "General Settings" and "Time Settings". They are described below. When you have finished adjusting these settings you can click "Preview" and Synfig Studio will start rendering your preview and open the Preview Window. If you want to close the Preview Options dialog box without starting to render a preview you can click "Cancel" or press Escape.

The "General Settings" allow you to adjust the quality of your preview – its size and its frame rate.

Normally, to save time, previews are smaller and have a lower frame rate than the original animation. But, because Synfig Studio is so flexible, you can actually render a preview with a higher frame rate and a larger size than the canvas you are working on!

The "Quality" spin box allows you to increase or decrease the quality of your preview.

You can enter a number directly into the "Quality" spin box, or use the spin box arrows to increase or decrease it. You can enter a value between "0.10" (lower quality) and "5.0" (highest quality).

The number in the "Frames per second" spin box is a floating point number with one decimal place, so you can specify the frame rate accurate to a tenth of a second.

The default frame rate setting in the "Frames per second" spin box is the frame rate of the canvas you are previewing divided by 2.

This check box let use choose between two rendering method of the preview.

The "Time Settings" allow you to specify which point in time you want your preview to begin and end. You don't have to adjust these settings – if you don't adjust them the entire duration specified in the Canvas Properties Dialog for your canvas will be previewed.

However, for complicated animations it can save a lot of time if you just preview a small section.

If you want to your preview to begin at a time that is not the beginning of you canvas (0f) then:

When you click "Preview" in the Preview Options dialog your preview will start to render and the Preview Window will appear: 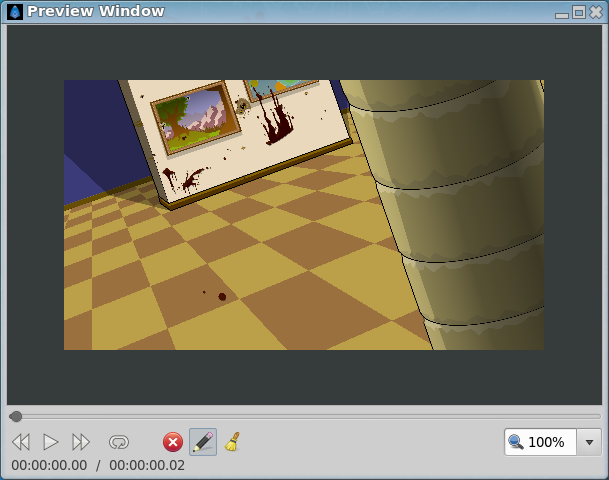 You don't have to wait for your preview to finish rendering before you start to look at it – you can preview the frames that have been rendered so far.

There is a red frame display to the top left of the Preview Image. It looks like this:

The Frame Display tells you which frame the Preview Image is displaying.

There is a Slider beneath the Preview Image. It looks like this:

You use it to do something that traditional animators call "rolling" or "flipping" their drawings. This is where animators use their fingers to flip through several drawings on paper quickly to look at movement.

There are three ways you can use the Slider:

Once one of the buttons has focus you can use ←→ to move between the buttons and Space to press them.

The buttons are all explained below: