Les "Points de Passage" sont des symboles graphiques disposés sur le panneau de l'Timetrack. Chaque fois que la valeur d'un paramètre est modifiée en mode édition de l'animation, un Point de Passage vas être créé. For example, when you adjust a "Tangent" Poignée of a vertex in a Spline, a "Waypoint" will be created to note the change. However, you didn't really adjust the tangent, you adjusted the two parameters which define the tangent: its angle ("Theta"), and its length ("Radius"). Opening up the tangent's nodes in the Panneau Paramètres will show that "Waypoints" have been created against each of these 2 parameters.

As a result of adjusting a single "Tangent" Handle, "Waypoint" have been created as follows:

Only the first 2 of these are 'leaf waypoints' - the rest are parents (and grandparents, etc) of these 2 waypoints.

As things currently stand, it is only possible to delete one leaf waypoint at a time. If, for example, you want to delete the change made to the "Tangent" Handle above, you'll need to open up the tangent and delete both the "Theta" and "Radius" Waypoints. The ability to delete whole trees of waypoints with a single click would be useful, as would the ability to select multiple waypoints at once, and operate upon them en masse.

Waypoints can be dragged left or right with the left mouse button to change the time at which they act upon their parameter(s). If you drag a parent's Waypoint, all its child Waypoints will move with it.

If the Waypoint is Linked other menu entries related to the link will appear up to those one.

Each Waypoint has an "In" and an "Out" interpolation setting, which determines the manner in which its parameter changes - whether it changes linearly over time, or follows a curve.

The color and shape of the Waypoint as displayed in the Timetrack indicates its interpolation type: 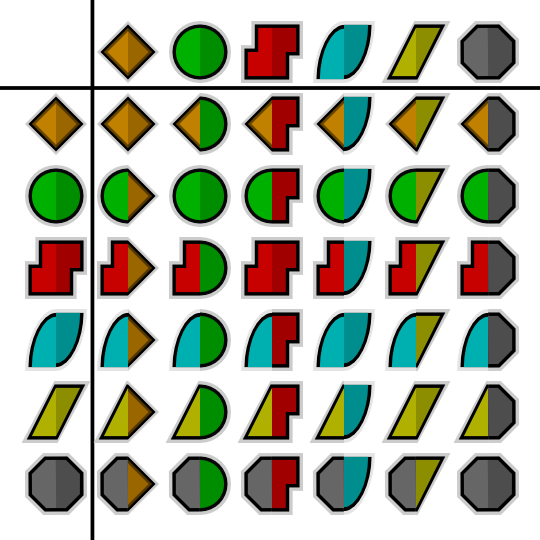 Note: the .sif file used to generate these screenshots is available. [1]

Look at the Waypoints below. They are from the Timetrack for the "Vertices" of an Calque de Contour.

TODO: rewrite the above so it doesn't hurt the brain so much.