Let's do it. Start Synfig Studio. New file is automatically created at the start. Click the 'caret' menu (between the horizontal and vertical rules, in the top left hand corner of the canvas), then select "Edit → Properties". The Canvas Properties Dialog will appear. 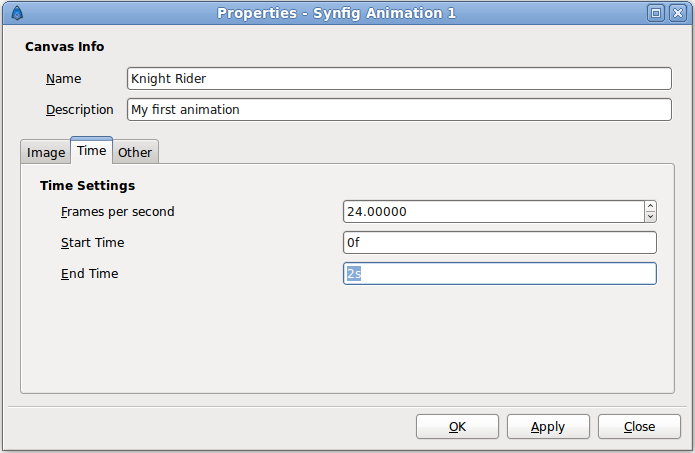 Now click "OK", and create a simple black rectangle that will serve as our background. It's not necessary to make it cover the whole canvas. 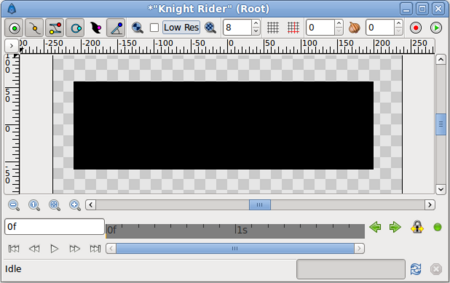 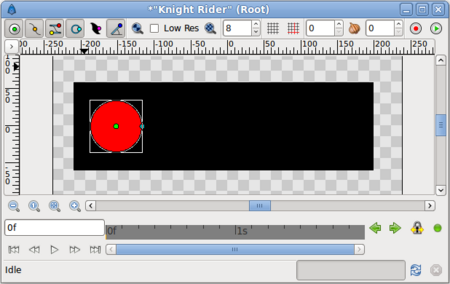 You may notice nothing changes on the canvas at this point. Switch to "Animate Editing Mode" by clicking the green dot to the right of the gray time slider (if you have version 0.62.02, you may see a green checkmark). The canvas will display a red outline; it reminds you that changes to your objects now affect your animation at the time shown in the time slider. In animation editing mode, every change to your objects creates what's called a waypoint; the waypoint associates the changes with the time. As you'll see, Synfig can create smooth intermediate changes between waypoints, and you can even change the way in which the intermediate changes take place. You'll probably find it helpful to associate some or all of your waypoints with keyframes. 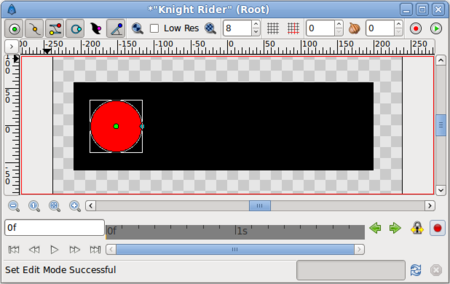 Previously, three "steps" or "stages" were mentioned. These are represented by so-called "keyframes". (Just in case you're familiar with video encoding: No, it's not the same!) A keyframe is an image in time where something important happens with your objects.

Go to the Keyframes panel — click on the little tab with the small key icon in the bottom window — to edit keyframes. Now press the small button with the "plus" sign and you should get a new entry in the list displaying "0f, 0f, (JMP)". 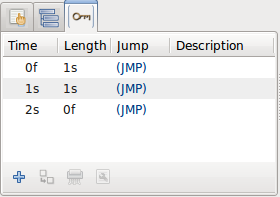 The keyframe list is rather easy to understand. It displays "Time" which is basically the start time, "Length" which is self-explanatory, "Jump" which we'll cover next, and "Description" which is, again, self-explanatory.

Notice, that you don't need to go to the last keyframe at "2s" and move your circle back to the left. Keyframes make Synfig remember the image states at particular times. That's why when we modified the circle's position at "1s", it stayed on the left at "2s" (as well as at "0s"). If you switch back to the Params Panel, and look at the Timetrack Panel you'll notice that three green dots appeared on the right of the "Origin" parameter (since Synfig Studio 0.63.04 the default waypoint type has been modified to be an orange diamond). Those are called Waypoints, and they represent times at which object's parameters, like location or color, are instructed to take on specified new values.